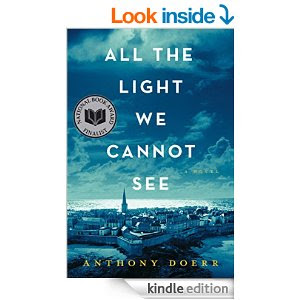 Metro: Clarendon (Orange Line)
All The Light We Cannot See
by Anthony Doerr

“Does the world need yet another novel about WWII? It does when the novel is as inventive and beautiful as this one by Anthony Doerr. In fact, All the Light We Cannot See–while set mostly in Germany and France before and during the war–is not really a “war novel”. Yes, there is fear and fighting and disappearance and death, but the author’s focus is on the interior lives of his two characters. Marie Laure is a blind 14-year-old French girl who flees to the countryside when her father disappears from Nazi-occupied Paris. Werner is a gadget-obsessed German orphan whose skills admit him to a brutal branch of Hitler Youth. Never mind that their paths don’t cross until very late in the novel, this is not a book you read for plot (although there is a wonderful, mysterious subplot about a stolen gem). This is a book you read for the beauty of Doerr’s writing– “Abyss in her gut, desert in her throat, Marie-Laure takes one of the cans of food…”–and for the way he understands and cherishes the magical obsessions of childhood. Marie Laure and Werner are never quaint or twee. Instead they are powerful examples of the way average people in trying times must decide daily between morality and survival.”